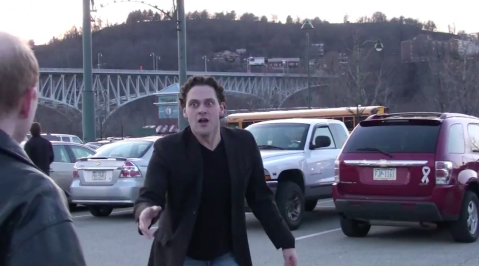 The second season of Franks and Beans comes to a close with episode 48: The Rating Game, and Larry and I wanted to go out with as “big” an episode as we could possibly muster.  With no budget and one camera, the idea of “big” is relative, but we wanted to do as much as we could.  Our luck was running high on this day, as we were able to (gasp) shoot at a different location and (coronary) include five guest stars in one of our longest episodes of the series. 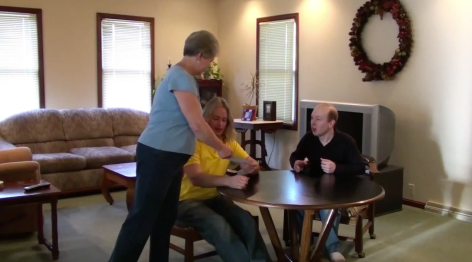 Our first guest was Larry’s mom, who revived her role as “person who hands mail to Larry”.  Judging by how Larry takes the mail out of its envelope, she is apparently also the person who reads Larry’s mail beforehand and then doesn’t do anything to hide the fact that she is committing a federal offense.  Oh, and she interrupts a perfectly improvised scat in the process. 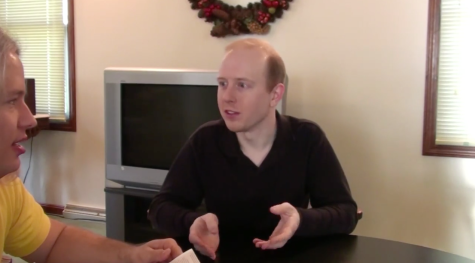 There are many things that I learned from this episode, which in itself is a bit of a commentary on the show, as Larry and I openly refer to Franks and Beans as a concept, while filming for the show we are discussing (whatever).  The first of these lessons is that I should probably not wear this shirt anymore (which I still have), because a dark black top makes my skin look like it is being deprived of oxygen or something.  Maybe it’s the lighting.  But then there’s Larry, who comparatively looks like a bronzed Adonis (which is a really laughable concept if you think about it) when sitting next to me. 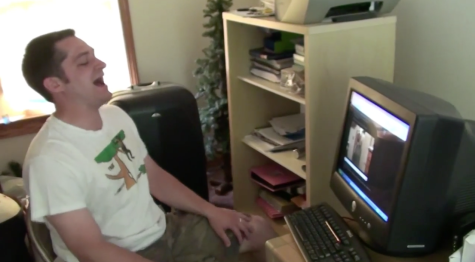 The Franks and Beans official YouTube ratings have always been an…interesting point of discussion between Larry and myself, and our next guest, “Hardcore Mark” Moncheck (Larry, did Mark give himself that nickname?) illustrates our plot point by laughing at the “NO!” ending to one of our first episodes.  Oh!  And check out that Tree Hugger shirt!  It almost constitutes a guest appearance on its own.

Larry’s beloved Jeep was literally traded in in the “Cash for Clunkers” program, and here we debut Larry’s new-ish Honda.  I love the scene where Larry and I, after a bout of depression, bolt out of the door, putting clothing accessories on as we run.  The “new car” joke is a callback to, among other episodes, “High School”, and is probably not that funny, but Franks and Beans is nothing if not self referential. 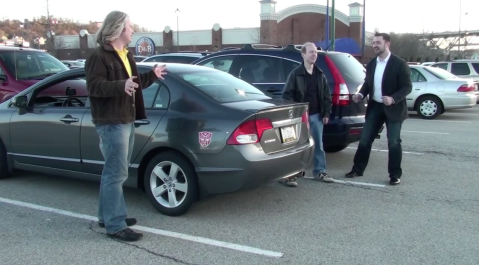 Let’s take a minute to talk about the day that this episode was filmed, an early spring day in which Larry and I drove up to Homestead and the Dave & Buster’s parking lot, and all of the favors we called in to make this happen.  This day in March just happened to be the day of my brother-in-law’s wedding rehearsal.  Rather than try to be a supportive groomsman and help make an important day less stressful, I thought it’d be a good idea to get everyone to film an episode of Franks and Beans, shooting some scenes like the one pictured above as others went about fulfilling obligations.

The groom-to-be was Josh, known to the Franks and Beans word (as explained earlier: Mark) as “Replacement Larry” from the episode, uh, “Replacement Larry”, even took the time to be in this damn episode as everyone else waited on him to start eating.  After his scene, which took two takes, he ran very fast back into the building where he was probably yelled at. 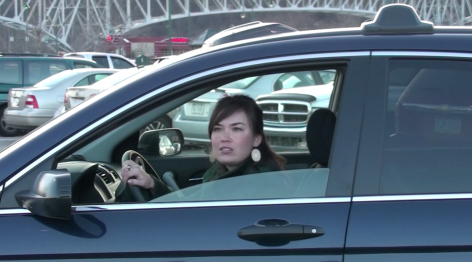 Josh is a well-connected individual, and by that I mean something other than his obvious ties to organized crime.  He was able to put me in touch with two people who are ACTUALLY ACTORS (I cannot stress this enough) and were in town, from Los Angeles, for the wedding.  First up is Heather Comstock, who, among other things, has at times painstakingly and meticulously entered in closed captioning text for various industry productions (her IMDB page proves that I am not a liar).  Heather, without ever having actually met either of us, graciously provided the line “Franks and Beans sounds like a gay porno troupe”, which to her (and, I guess, everyone else) had absolutely no context.  The fact that she did not know who we were probably helped in getting her to agree to be on the show.

In any case, I was pretty stunned at how well she acted out the scene, which caused me to be 1) embarrassed at how poorly Larry and I act, and 2) a bit starstruck at how well someone else could do it.  To this day, Larry tells me that he thinks I have a crush on this poor girl, to which I have no reply other than to remind Larry that there exists plenty of blackmail-able information on his part as well. 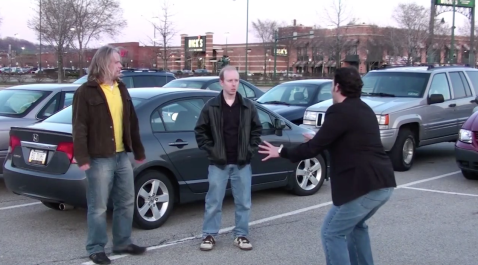 Next up is Matt Easton, of whom we discusses extensively in our last post, so I won’t bother with the obsequiousness here, other than to say that Matt is a legitimate actor who might one day have his SAG membership revoked due to his appearance on Franks and Beans.  Check out his IMDB page.

Oh, and he was the best man in Josh’s wedding. 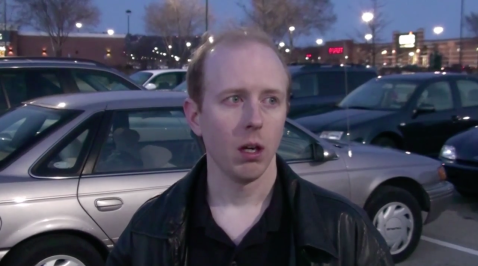 The idea of my character being more concerned with views for our videos than losing my wallet or, say, grand theft auto, was a bit of an understated end to a more ostentatious episode, but hopefully it wasn’t lost on anyone.  And it’s nice to know that I still look deathly pale in that damn black shirt from beginning to end.

Overall, the point is, watch Franks and Beans.  Watch it, damn you, and tell your friends to watch it.  There are more than seven billion people on this earth.  Is it too much to ask that at least half of them watch out show?  I don’t think it is. 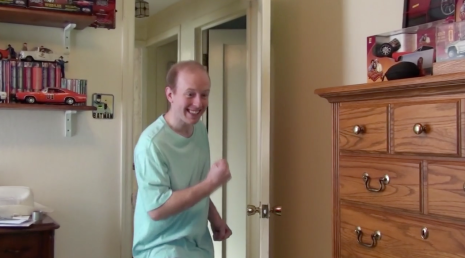 Our “NO!” ending is actually a “YES!” ending, as Larry and I switch roles for the final episode of all seasons.  That might not have been clear earlier, as before this there was only…one…such ending.  Larry was totally jealous of me as we finished editing, late into the evening.  “You always get the best ones”, he said, which I suppose meant that he was impressed with our work on “The Rating Game”, but I just took as sour grapes.  #$%$ you, Frankenberry.