The last song we used was just a LITTLE too close to being available in the public domain for our tastes.

And there we are!  It took 44 episodes for Franks and Beans to do an episode about beans.  I believe that both Larry and I should be commended for, if nothing else, our patience in introducing something that we all probably saw coming – Franks and Beans Beans and Franks.  Our show is, after all, named after baked beans.  Oh, and Larry’s last name is whatever.  But the point is, we held off until the time was right, and the right time was…episode 44, “Beans and Franks”.

The premise of this episode is fairly simple: Larry and I decide to branch out, and what property doesn’t attempt to do this after it’s been established for a while?  We put a lot of money into a product that ends up being a bust.  We decide to forge ahead anyway, passing the bill of goods on to whoever would decide to eat some baked beans with our faces on the can.  Any one of these concepts could serve as the primary focus, but economical as we are, we put them all into one episode of Franks and Beans, in which we spend a lot of time spitting beans into a bowl, and then making Larry’s dad eat them afterwards as we watched in horror.

The episode was pretty easy to follow, if I can say so, but it did include a lot of dialogue and not many cuts in the action.  To combat this, we might have taken some time to study our lines, but instead we pulled a Marlon Brando and wrote some of our lines down, placing them by the camera so we could cheat and look at them while the camera rolled.  This is easiest to spot when I’m listing off the fake ingredients in our fake baked bean product, as I’m looking just a little bit to the side during the whole thing.  As is often the case, though, the low definition quality of the upload to YouTube certainly covers up some of our shame.

“Beans and Franks” also includes a few VERY TECHNICAL effects, including the picture-in-picture deal that is sure to be a feature on all televisions from the years of 1999-2003.  Seriously, who has the multitasking capabilities to watch two different shows at the same time, only one of the shows is on mute and is tiny and in the corner of the television?  Maybe this was just a feature developed specifically for pornography, like the “private browsing” feature on Internet browsers.

In all, this was a simple concept, but one that I thought worked well, to the point that I wouldn’t be surprised if a number of other comedy shows have tried different variations on the same themes, which is valid, I’m sure, in its many forms.

Our “No!” ending this episode gets some special attention, as it lasts nearly as long as the main segment itself.  In this extended feature, we say goodbye to Larry’s trusted (but not always trustworthy) Jeep, which took him to places like Grindstone, PA and, presumably, other places in the many years in which he had it, stretching all the way back to when he was in high school, whenever that was.  A loyal friend to the end, the Jeep, in its later years, took on the persona of a car that wouldn’t really go anywhere, with a window that wouldn’t really roll up or down, with a radio that wouldn’t really play music other than “All Star” by Smashmouth, and so we at Franks and Beans decided to give it one last sendoff by destroying it in a hellstorm of fury, complete with a sad montage from earlier episodes and a song that expressed the longing and regret Larry and I both felt about using the Jeep to kill that guy that one time.

This episode comes with an “alternate audio version”, which means that Larry and I couldn’t ultimately decide on which song to play over the final montage.  The original choice, mine, was “I Will Wait for You” by Connie Francis, which is one of the saddest songs I’ve ever heard, though this is most likely because I associate it with the “Jurassic Bark” episode of Futurama.  If you’ve never seen this episode before, enjoy the fact that you haven’t been subjected to what is possibly the most heartbreaking episode of any television show in the history of the world.  If you have seen it…then go and hug your dog.

Larry, as is his right, chose the Michelle Branch song “Goodbye to You”, which, as you might know, is actually about a car.  Also, Larry played softball with Michelle Branch one time and he won’t stop talking about it, which is cool, I guess.  Take a listen to both versions (I’ll post 44.1 in a few days) and choose your own ending, just like those books…what’re they called?  Whatever, it’s not important.

Here’s a picture of the can itself, which looks like it contains delicious, delicious beans and doesn’t have a label that was just printed at home and then slapped onto a can of Campbell’s baked beans or anything.  This served as the theme to our highly successful (…) Franks and Beans volume 2 DVD, the case for which contained a fake nutritional guide and everything.  This was a fun episode from start to finish, and in an alternate reality where people watch this show, it’s become one of our signatures. 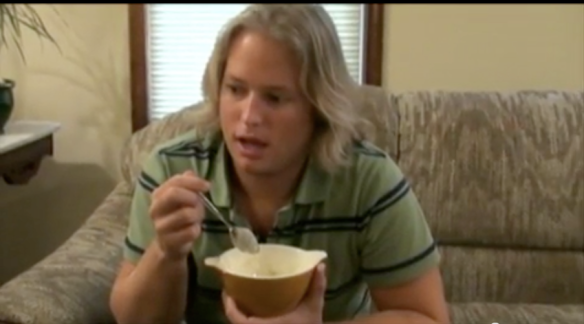 Campbell’s Chunky Soup is a notable sponsor of the NFL and has been for years, though perhaps not as much as in years past, when Donovan McNabb and his mother starred in a long string of commercials for the soup (that eats like a meal).  During the run-up to Super Bowl XL, Campbell’s took full advantage of the Jerome Bettis media blitz and sponsored several events with Bettis and McNabb, even going so far as putting each of their mothers on people-sized scales (with cans of soup on the other end) to raise money for charity.

But now, Bettis is retired and no one likes McNabb anymore for some reason.  Time goes on.  But our barf-tacular 37th episode, “Chunky” is here to stay, oh yes.  Do you hear that, world?  Franks and Beans will never leave you!  We’re like a best friend, a guy living in your basement, or an unfortunate and stubborn rash, and this episode exemplifies that idea.

The main thrust of this episode, I suppose, comes down to the idea of “wouldn’t it be gross to eat vomit?”  And as someone who has thrown up a few times in the past, I would have to say that yeah, it probably would be.

If there is a problem with this episode, it may lie with the fact that there’s really no surprise in what the joke is ultimately going to be.  Once Larry puts his container of puke (patent pending) on the counter, it’s pretty obvious that something terrible is going to happen with it, and we lay it out pretty clearly once Larry tells Jeff that he can have some of the soup that’s on the counter.  I guess, though, that whether it was obvious or not, the joke depends much more on the gross out factor than it does on the element of surprise, so in a way it can still succeed.

One thing that I learned from this episode is that clam chowder is actually pretty gross in and of itself.  Larry loves the stuff, so I went ahead and bough a can of it for the episode.  We ate it cold, for some unknown reason, and that may have had something to do with it, but I’ve never been a fan of seafood before and this event didn’t change my opinion.  I also don’t like to eat barf.