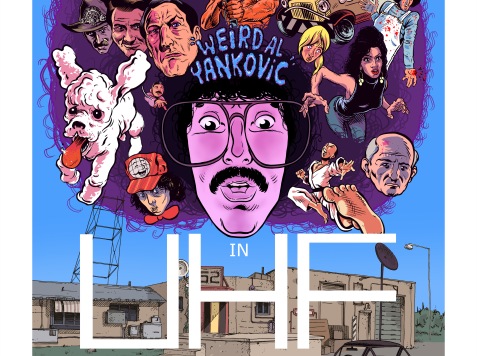 Should I keep my different projects separate?  Should I keep the Franks and Beans blog un-despoiled by non F&B items?  Here’s an idea, faithful reader: why don’t you watch your stinkin’ mouth?

Ugh, that was harsh.  I’m sorry, guys.  This is an especially egregious error as I am trying to raise a little bit of money to show “Weird Al” Yankovic’s 1989 cult classic film “UHF” at a local theater on May 31st of the year.  What was I thinking?  Please, forgive me.

Here’s the details: I recently launched a Kickstarter campaign to help offset the licensing and rental fees associated with the screening.  The film will screen at Latrobe 30 Theatre & Cafe, and it will take place the same day as Al’s Greensburg, PA “Mandatory Fun” tour date.  The theater is fewer than 10 miles from the concert venue, so I’m hoping that fans and those attending the concert will want to see the movie earlier in the day.

I’ve got a whole lot of rewards to offer up to anyone who pledges, from 11×17 prints, to pins, to shirts, to a gigantic, movie poster-sized print that is the official image of the campaign and screening:

You can even get tickets to the show if you live in the area (or feel like a road trip), though you don’t have to attend the movie to get the other items!

I just announced that anyone who pledges at the $10 level or higher will get a Money for Nothing/Beverly Hillbillies inspired sticker at no extra charge!

So if you enjoy Franks and Beans, you’re a fan of Weird Al, or if you’re just a nice person who would feel bad if this dang thing doesn’t succeed, I hope you’ll click the following link to read more about this UHF movie screening Kickstarter project: https://www.kickstarter.com/projects/jeffmcclelland/uhf-movie-screening/

Even if you can’t pledge anything, I hope you’ll decide to share this project with people that you know.

Since the “Beans and Franks” episode played so heavily into our *very collectible* season two DVD design, I thought I’d post some of those images here for all to see.  In fact, now everyone can print and mass-produce their VERY OWN copies of Franks and Beans season two DVD cases!  Won’t that be fun!

Some notes on the above image:

– The baked bean background is a Franks and Beans original.  Mitch Mitchell, he of the camera-owning status, made a trip over to the “studio” to snap some pictures of baked beans that we poured out of a can.  At high resolution, baked beans look kind of gross.

– We added our very own QR code to the back of the case.  Scanning the code brings you right to…this site.

– We should probably come up with a different logo for the show for subsequent releases, as look at this one makes me sad and wistful for the hair I used to have.  It was beautiful, really.

The above and below images are from the DVD insert; on one side is the episode guide, and on the other, a Beans and Franks-specific reference.  The episode guide is obviously a take on the nutritional label on most foods; judging by this list, I’d say we skimped on the commentaries this season. 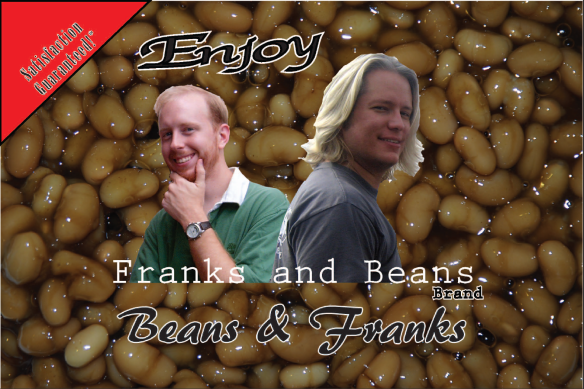 The other side of the insert is an ad for Franks and Beans Brand Beans and Franks.  Try some today, won’t you? 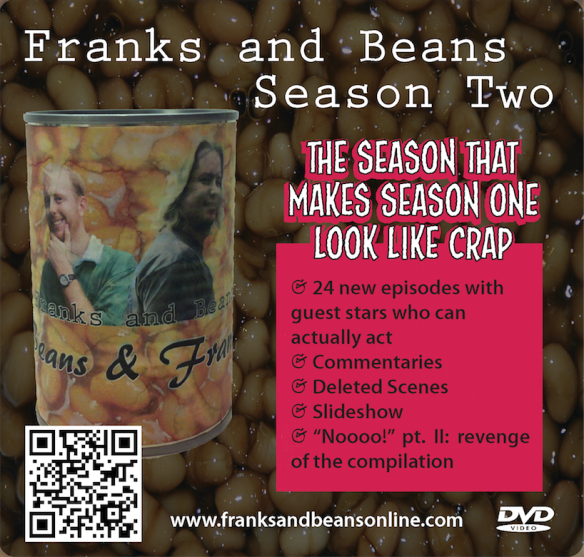 When we decided to streamline the product and go with the slipcases instead, I designed this sticker to go on the back of the sleeves.  It’s basically a condensed version of the above, with a new (and perhaps funnier) slogan.  I managed to keep the QR code and the picture of the can.

Larry and I took these DVDs to Comic-Con in 2012 and – get this – actually sold a few of them.  I’ve got a stack of these sitting in my house at the moment, taking up space and making me consider throwing them off of a bridge.  If Larry and I make it back to San Diego this summer, I think we’ll take a day and hand the rest of them out to innocent and unsuspecting line-goers.  And maybe, just maybe, someone will watch ’em. 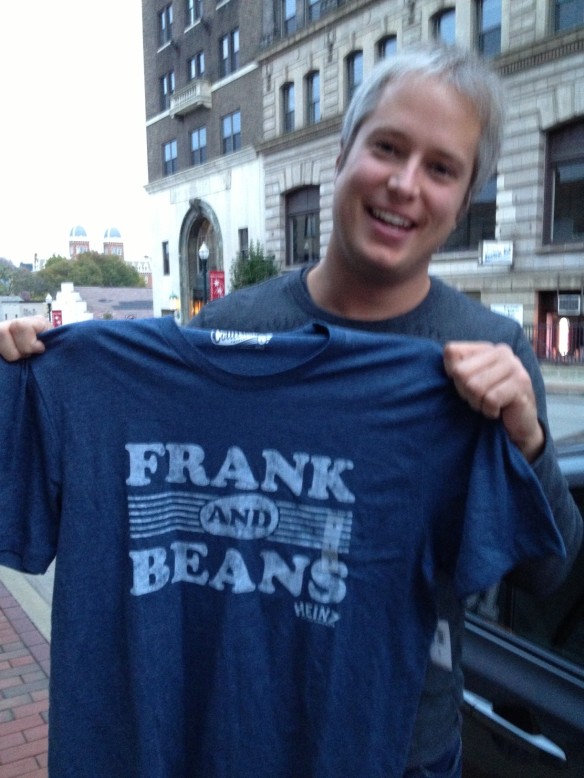 If there truly are parallel universes as some claim, that means that somewhere out there in the vast expanse of the unknown there is a world, at least one world, where Franks and Beans is so beloved that it has its own merchandising arm, where throngs of adoring fans can spend their hard earned money (or whatever passes for money on alternate Earth – tree sap, perhaps) on the newest products and wearable garments.

One such garment might look like the above picture of a retro-looking Heniz shirt, except that “Frank” would have an “S” added to it, and also we would be selling these things instead of buying them at Old Navy, budget friendly though they might be.

Of course, there’s always the chance that we can dutifully recreate this alternate reality merchandise with some fabric paint and a well-honed sponge and wear it around on THIS earth until we are eventually hunted down by some authority tasked with keeping different versions of reality separate, which might look something like this:

And wouldn’t THAT be fun?