The Magic Bullet is a free, Washington, DC-based comic newspaper that publishes on a semi-annual basis.  Why, then, am I posting this to the Franks and Beans website?  That’s a great question.  Here are some answers:

Ha HAAA!!  Wow, what witty banter you can expect from the Franks and Beans website.  We’re basically out of control over here.  Seriously, you can ask anyone.

The eighth installment of the Magic Bullet came out a few months ago, and inside was a one-page comic that I wrote titled “I Hate the Moon”, for obvious reasons.  Also included is this Franks and Beans print ad:

Hey, look!  It’s the “Double Delivery” ad that we made a couple years ago for Comic-Con!  I think we’ll be submitting another episode to the Comic-Con Film Festival in 2015, if for no other reason than to create another print ad.

One of the things I enjoy the most about advertising in the Magic Bullet is getting a thank you card in the mail addressed to Franks and Beans, like those are our names.  According to the printed names on the inside of the card, I am one of the creators thanking Franks and Beans.  Well, you’re welcome, Jeff McClelland.  I guess. 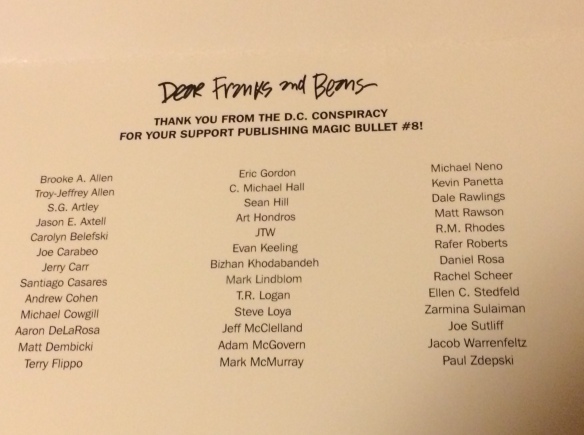