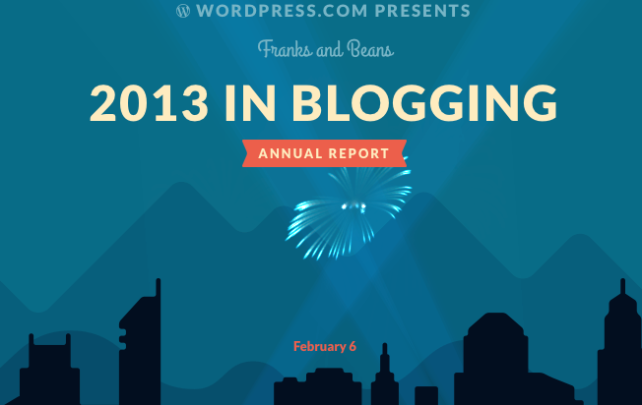 2013 has come and gone, and hey!  Franks and Beans, despite all evidence to the contrary, is still around.  The band has not dissolved.  Larry and I do not have creative differences.  There are still stories to be told.  The cat’s in the cradle.

I don’t know if it’s fair to say that Franks and Beans went on hiatus for the second half of 2013, but the fact is I haven’t posted anything new on this site since, what, June?  That’s kind of dumb.  I suppose that there are a few reasons for this, but the prevailing one stemmed from some uncertainty about the F&B domain name and branding.  It’s a long story, and it’s not something that I’ll get into in any great detail, but after some long discussions and some stressful weeks, I needed to take a break, and a few days stretched into a big part of last year.  It was never my intention to let the site go unmanned for so long, but the start of 2014 seems as good a time as any to wind the machine back up and start posting again.  So, you know, tell all of your friends.

In the meantime, let’s talk about the weird stats package that WordPress puts together at the end of each year!  As with last year’s presentation, this one brought out some information that is, at the very least, mildly interesting.  And if there’s any way to describe Franks and Beans, it’s “mildly interesting”, so let’s see some of the highlights! 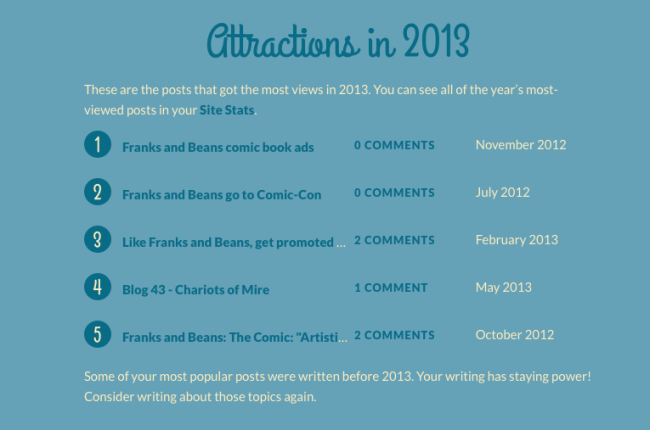 This particular screen made me laugh (well, not out loud, just that kind of Internet laughing where you breath slightly harder out of your nose), because our most popular posts for the whole year are not our videos, and four of the five aren’t even ABOUT our videos.  More people come to this site, apparently, to read about comics than they do to watch our HILARIOUS AND INVENTIVE comedy.  So the plan is working.  Perhaps I need to work on my tagging…I’m sure that’s it.

According to WordPress’s highly personal evaluation, my writing has staying power.  I am not going to argue with this.

Also, many thanks to Lauren of “Gregarious Girdler” fame, who is our number four referencer, beating out the all-powerful Facebook in that regard.  She didn’t do as well as the Pittsburgh Comicon website, though.  So step it up, Girdler.

2013 was an interesting year for Franks and Beans.  2014, though, should bring bigger and better things.  And also some posts.  Let’s make it happen.

1 thought on “The Franks and Beans…uh…half year in review.”