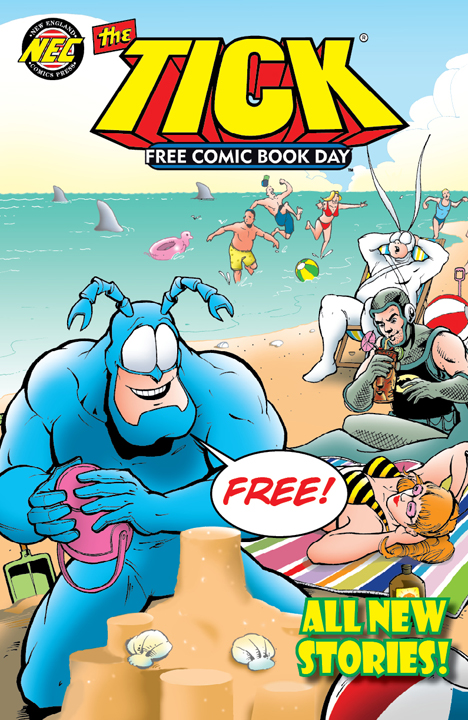 If you watch Franks and Beans, you are distinguished by two factors: first, you are our best friends.  Second, you’re part of a rare group.  We’ve been doing a little bit to try and change that lately (the rarity part…not the other one.  You will always be our best friends.  FOREVER!) by trying to get the word out in places other than on our other blogs.  Perhaps you, crafty consumer, have seen some of these mentions in the wild over the past few weeks.

One of my greatest achievements in life (I’m serious) has been in writing the Tick comic book for New England Comics.  To date I have written…ONE ISSUE!  But oh, what an issue it was (and there are more on the way, by the by).  Who knows when the ride will end, but in the meantime, I might as well plug Franks and Beans if I can.  Proof of life:

Hooray!  Who would have thought it was possible?  But here we are.  This particular comic was the Free Comic Book Day issue, so there were literally tens of thousands of these out and about, to my delight.  Hopefully enough people read the text page to get a least a few new viewers.

Next up we have the latest issue of the Journal of Venture Studies, which was put out in conjunction with Adult Swim.  The new season of the Venture Bros., one of my favorite shows of all time, is on the air starting tonight, as it so happens, and I was lucky enough to get a chance to write an entry in this faux journal.  I got to write a mini-bio at the end of my article, and they let me sneak in a quick F&B reference:

Double hooray!  This reference requires just a bit more diligence on the part of the reader as someone would actually have to go to Google and painstakingly search for this website, but hey, there’s always hope.

You can find my entry and the entire journal by clicking on this link: http://venturestudies.com/volume2.html

And lastly, I showed off this new ad in the Magic Bullet paper a little while ago.  I might as well show it again, because it’s great.  But I also got a card in the mail the other day from the editorial staff:

This in itself is cool, but opening it up we find that someone actually had to write out the phrase “Dear Franks and Beans”.  Someone took the time to do this!  That’s funny.

As you can see, we’re on our way to being really super popular.  Once that happens, you can act all indignant and tell everyone that you knew us before we were a household name.  I’m pretty sure that this will happen.  Yes.