The Franks and Beans media push is go!  We’ve got an ad in the recently printed, recently released and recently mailed-to-me sixth issue of The Magic Bullet, a Washington, DC-based large format comic newspaper.  The Magic Bullet is a semi-annual publication that is given away absolutely free to thousands of eager readers, and also perhaps to crazy people who want to make hats out of it.  Here’s the cover!

You may, of course, be wondering just what demographic Franks and Beans was trying to reach by advertising in a DC metro-area free comic newspaper, but this is the result of some pretty heavy market research.  And also I published a one-page comic in it, titled “The Naked Man at the Edge of Time”:

And then, you know, things just kind of came together.

You also might be asking if this ad buy has had any effect on the site’s traffic.  Well, not that it’s any of your business, and it’s kind of rude for you to inquire into such structurally sensitive matters, but as a matter of fact, there has been a slight bump in the numbers in the last few weeks.  This might be a result of the ad, or it might just means that Franks and Beans is slowly working its way into the zeitgeist and the ad was completely unnecessary.  But there it is, for all to see.  It’s not the only mention that F&B is getting in a publication, as it turns out.  I’d tell you about that now, but I can totally just make a brand new post about that in a couple days and feel good about updating the site more than once a damn month.  And what fun that will be!

Oh, and the Magic Bullet website has a nice outgoing link to this very page.  Hooray! 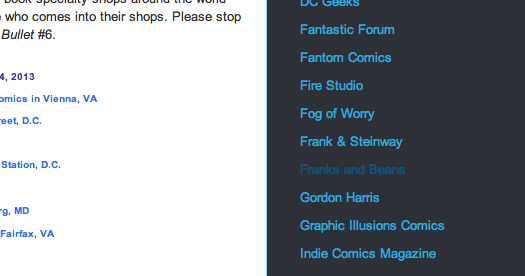 …yes, I clicked my own link.  But I can confirm that the link does work!  Take that for what it’s worth.

Mark of the BEST!

One day, either Larry or I (probably not both at the same time) will have a job that we will be unceremoniously fired from for the above image.  I imagine myself called into an executive office, high above the bustle and din of the New York City riffraff.  I’ll be escorted in by a no-nonsense, 34-year-old receptionist (other role: to run after an angry client yelling, “Sir, you can’t go in there!  I told you, he’s in a very important meaning!  I’m sorry, Mr. Peterson, I tried to stop him!”) with bangs and full-length sleeves as the man in charge, a straight-laced William Daniels-type character who stands by the floor-to-ceiling windows, peering out over the landscape that he feels a part of as much as his own family, folds his hands behind his back and waits, exuding the power that befits one of his position.

“Sit down, Mr. McClelland”, the silvery gentleman will say to me, if it is indeed me who is employed in this corporate giant that I am apparently destined to join, despite having no background or interest in business.  Unsure of the nature of this meeting, I sit but nervously shift in my leather-bound seat.  “I want you to do something for me, Mr. McClelland.”

“O-of course, sir,” I respond, my pulse rising as I adjust my uncomfortably constraining necktie, my actions giving away the uncertainty I feel, the quiet desperation I keep inside bubbling to the surface.  Still looking out of his window, a private balcony on the other side, he responds.  “Turn around my computer monitor, if you would.”  The words are spoken with a cold courtesy.

“The monitor?” I stammer, unsure of the purpose to this exercise.  “Yes, the one on my desk,” he answers, a hint of frustration welling up in his voice.  I lean over the desk, kept neat and tidy in a manner that belies the many responsibilities that are dealt with there.  I notice a picture of a dog, a cup full of golden paperclips and a hastily-written phone number of one “C. Clinton”.  I take hold of one of the corners of the paper-thin monitor and slowly swivel it toward me, and I see the picture.  The Franks and Beans “Naked Chicken Dead” picture.

“S-sir, I…I can…” I begin, trying to formulate a response that can explain the purpose behind the all-male, all-nude scene.  “I expect,” Peterson answers before I can finish, “that you’ll have your desk cleared out by noon.  Security can see you out.”  He then turns, for the first time, from his position overlooking the city.  In a moment of introspection, a crack in the foundation, he removes his glasses and looks at me – and through me.  “You know, Mr. McClelland, I was just about to make you partner.  But now…” his voice trails off, the rest left unsaid, and he turns back to his window, his city in the clouds.  An elderly, uniformed man enters and I leave, my shoulders slumped, my dreams dashed, my career in a spiral from which it may never recover.

In other news, IT’S OUR 39TH EPISODE!  NAKED CHICKEN DEAD!  And what a fun, unique episode it is.  Despite a few issues, I think that it’s one of our best.  It’s got shock value and lots of strange humor that really sings to me.  It may not flow or have the plot that some of our other well-recieved episodes do, but what this episode lacks in plot it makes up for in punch and effect.

There are a few things to note about this episode, starting with the “please stand by” graphic.  This is, of course, a slightly altered image that was once commonplace for stations that would go off the air at night, of which a solid tone would be played over.  Larry and I are just old enough to vaguely remember that this would happen on a few stations, though this particular graphic is a few more years before our time.  If I had my way, I probably would have just left it as is, but Larry pushed to have our pictures overlaying the image as well, and it does have a certain effect that makes it work, I think.

Both of the pictures we used were taken at the wedding of none other than longtime fan Mark Moncheck.  I’d show one or both of them, but I’m fairly certain that they also contain Larry’s girlfriend in them, which means they will never be posted to this site.  As an interesting aside, Larry, Mark and I also began filming an episode the night of Mark’s wedding (at the reception, even), but due to certain restrictions, such as the fact that IT WAS MARK’S ACTUAL WEDDING, the episode was never finished despite having a pretty good joke attached.  Maybe one day we’ll release the footage as something of a “lost” episode.

In this episode, Larry and I fall back on some of our traditional themes – namely, nudity.  There’s something inherently funny about naked people in different contexts, especially when there’s a censor bar present (though I’m unsure as to why it takes up nearly half my body in the scene).  Everything else plays upon this absurdist theme, with chickens and death following in a pretty natural order.

If I had one issue with this episode, it’d be in the sound quality of the voiceovers.  I suppose that sound recording is my biggest source of consternation with the series in general, as the in-camera microphone often doesn’t cut it.  It’s sometimes especially noticeable when we’re recording voiceovers.  There are times when it works perfectly, but others when it’s a real hindrance.  I’d love to get a shotgun microphone for the camera and maybe one day we will have one.  Watching this episode, though, convinced me to address the voiceover problem, at least, and a few days after I posted the video to this site I went out and bought a desktop mic…I’ll show pictures of that shortly – I’m pretty happy with it and I think that it’ll bring a better audio quality to the show, at least in some capacities.

There’s an embarrassment of riches on display when it comes to this episode, and the “NO!” ending is no exception.  Taking a cue from…well, Hanna-Barbera cartoons in general, Larry gives his best overly-expressionist performance in this great sequence.  Music and sound effects can really add something that might not come across otherwise.  Audio isn’t something that we think of very often when we consider some of the programs we watch, but I think it plays a bigger role in our enjoyment than we might think or realize.

Well, that’s it for this time.  Back to my nudity.