Undoubtedly, reading one blog and only one blog forever and ever can give you a sense of unyielding, unhealthy loyalty, but when said blog only updates a few times a month (to use a hypothetical circumstance), it can get kind of lonely on the barren plains of the blogosphere.  Luckily (my second sentence to start with an adverb…for shame), we here at Franks and Beans can suggest other blogs for you to read.  Seriously (that’s three, dammit), we do this at least once every two years or so.

“The Gregarious Girdler” not only uses one of my favorite adjectives to describe itself, but it’s also run by a Franks and Beans fan o’ the month and the number three commenter on this site (after Larry and myself…which isn’t sad in the least), Lauren.  Having a penchant for using Gs in an alliterative manner, she previously ran the Grouchy Gastronome blog, but decided that it was dumb and that she hated it.  I could also have told her that, if only she had asked.

So hey, Franks and Beans fans, check out Lauren’s new WordPress-powered blog today – nay, this very second!  You’ll be glad you did.*

* This is not a guarantee. 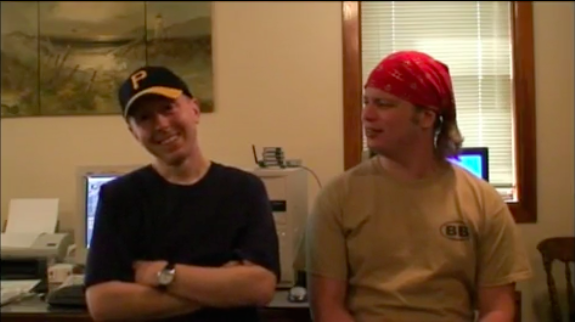 This episode of Franks and Beans, the Jerome Bettis-like 36th installment, is a pretty good example of a solid idea that could have used a little more fine tuning before unleashing it upon the world.  Overall, I think that the joke of the episode comes across well and that, unlike a few other episodes (*cough*eBay*cough*), it doesn’t run on too long before the payoff, leading to perhaps a logical but nonetheless satisfactory ending.

Let’s break this episode down, then, at least just a little bit.  I mean, I probably could just leave this blog as is with the first paragraph in tact and be done with it, happy that I’ve written yet another exciting blog to post on the site that’s already full of them (literally bursting!).  But that would be a cop-out, and if I’m going to update this site on average three times a month, then dammit, these blogs are going to be more than two paragraphs long.  If this were a Twitter site, I would perhaps add the hashtag #qualitycontrol or maybe #TheLeastICouldDo, but this is not Twitter, and damn you for implying that it is.  Also, you can follow both me (@JeffMcClelland) and Larry (@LarryAFranks) on Twitter if you choose. I don’t know why I brought that up.

This episode follows in the same theme as previous ones like “How To”, which also dealt with the idea of the “making of” Franks and Beans followed by a quick, one-off joke surrounding the idea that Larry does more than I do in regard to the show.  It was fertile ground enough, though, that both episodes can peacefully coexist without having one overshadow the other.

One of the big reasons, honestly, that Larry and I wanted to do this particular episode was to give us a chance to feature the terrible, horribly out-of-date JVC linear editing machine before we threw it off a bridge or something.  This was the machine that Larry and I both cut our teeth on (#old) in high school as we were creating embarrassing videos at whim (#FranksAndBeansLite).  We never, ever, ever actually used it in the production of an actual episode, and as the video featured on the tiny screens (#KillSwitch) can testify to, as it flickers and jumps, it would have been a disaster if we had even tried for novelty’s sake.  Why didn’t we just film that damn scene over again?  I can’t even guess, other than to guess (#hypocrite) that we were trying to go with a very conversational, improvisational approach to the episode come hell or high water.

My tiny scene near the end does a good job at capturing the essence of Franks and Beans, the irreverent nature and the fact that we’ll always go for a joke regardless of how crass it might be (#toilethumor).  Rest assured that in real life, I only come up with ideas in a highly sterile, hypoallergenic room with no furniture and four bright white walls with, perhaps, a hole in the middle of the floor where I can, in moments of despair, jump to my death in the event a good idea never does come to me (#gallowshumor).  But isn’t it fun to pretend that I do come up with ideas for Franks and Beans in mundane, common places like the shower, in the car or on the can?  Only the Shadow knows (#pulphumor).

Our highly-anticipated NO! ending (#noooo) features Larry’s at the time…I think…new piece of technology, the PlayStation 3, otherwise known as the gaming system that refuses to play “Return Fire” for the original PlayStation, no matter how awesome a game it is.  In fact, I remember playing that game in high school as well.  #Synchronicity!