What’s old is new again…for some. 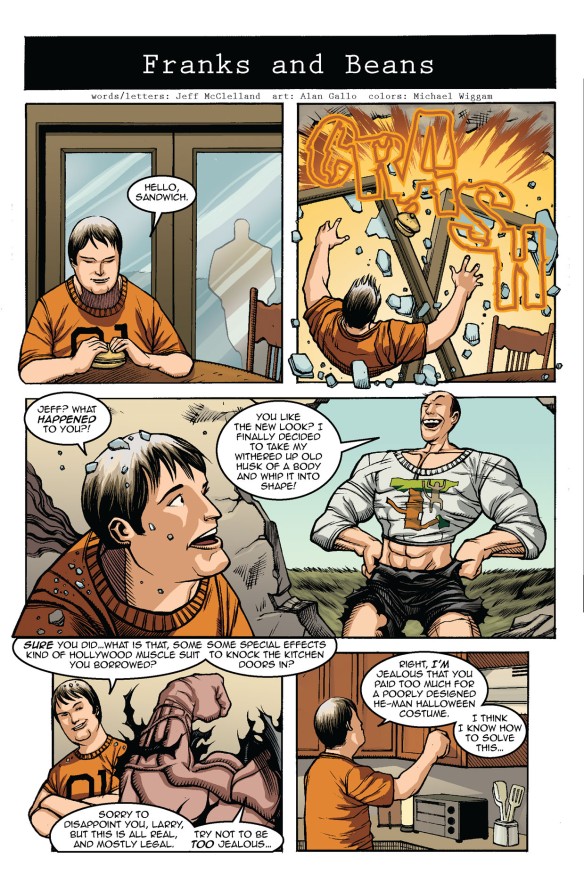 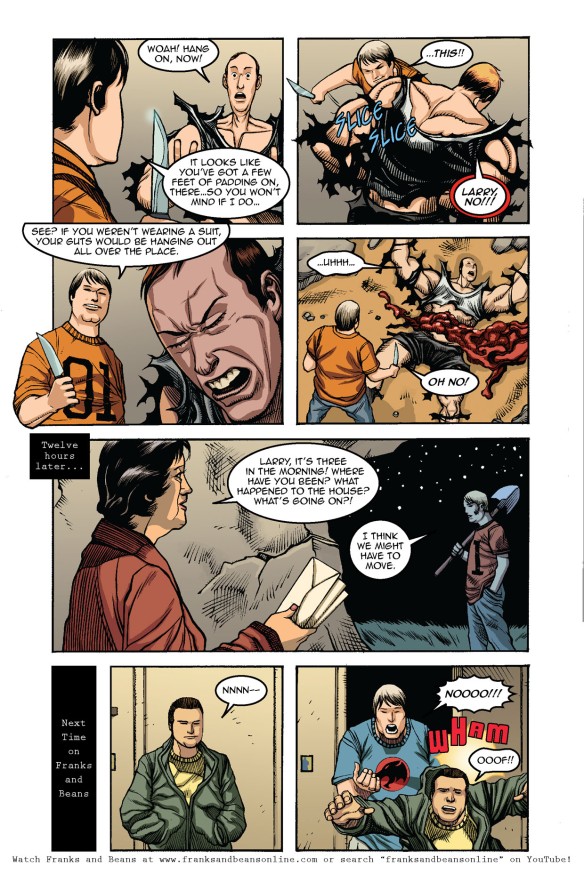 I’d say that it was fairly inevitable that we would come to this point.  With my stubborn insistence that I keep trying to work in the comics field (dear comics: notice me, dammit!), the limitations of a single camera, no-budget production and a desire to promote ourselves a little bit more, thus is born Franks and Beans: the comic.

Putting a comic together is similar to filming, in that it usually takes more than one person to put together a complete product.  This short, two page story took efforts from a few folks new to the Franks and Beans world but not to that of some comics that I’ve worked on before.  Pencils and inks on this story are by Alan Gallo and colors are by Michael Wiggam, both of whom I’ve worked with on Teddy and the Yeti and a couple other projects.

Alan took on the difficult task of drawing likenesses, which is a challenge not many are up to.  Add to the fact that Alan had to draw four distinct individuals and I think it’s easy to see what a task he had before him.  Given all of this, I’d say that he did just a great job.  On an unrelated note, here’s a little known Franks and Beans fact for you – Larry when on a diet after this comic first showed up and he lost like 20 pounds.  I don’t know why I mention this here, but it was something that just stuck in my head for some reason.  I did not start working out, if anyone is curious.

As with any neurotic comic book fan, you might find yourself thinking, “where does this story fit into Franks and Beans continuity?  Does it fit into the established storyline?”  The answer, of course, is yes, valued viewer/reader.  Everything that happens in anything Franks and Beans related goes into the F&B universe as cold, hard fact.  This, of course, changes the whole tone of Franks and Beans, as it now becomes a show about a man who dies over and over again, only to find new life and new, strikingly similar situations.  Or perhaps it’s an alternate universe Jeff, I don’t know.

This comic, which, if it had a title would be called “Artistic License”, features several references to previous Franks and Beans episodes, including “Sandwich”, “Tree Hugger” and “Milkshake”, as well as showing off in no subtle manner nods to other F&B staples like the Dukes of Hazzard, Thundercats and He-Man.  How do we work in so many nods to previous episodes and themes?  One can only wonder.

This comic will live, perhaps forever, long after Larry and I are dead and our bones decaying under the soft earth (or maybe I’ll just get cremated, who can say), in its own tab at the top of this page and on the Internet, leaving people to ponder deep questions like “what the hell is Franks and Beans?”  The question, then, becomes if we will ever have another Franks and Beans comic to marvel at.  The answer is not clear, but let’s say that I have no immediate plans for one, though I do sometimes get anxious and have a desire to spend my money on comics that will never see the light of day other than on my own websites.  So you never know!!

This posting marks a milestone in this website’s history – it’s our 100th post to the site!  Let’s take a look at our running tally of blog posts to date:

So it’s still neck-and-neck and anyone’s game at this point, which I guess is obvious.  Be sure to check back later for more of this exciting competition! 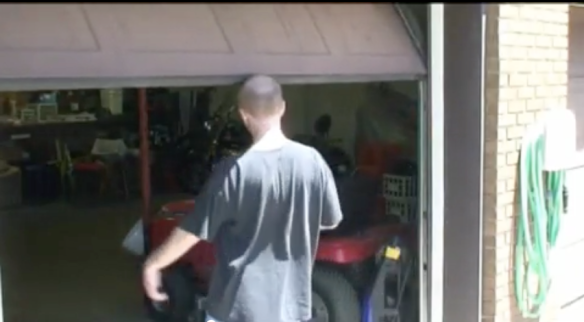 When the Borg first appeared in Star Trek: The Next Generation, they immediately struck a chord with fans and viewers of the show, not because they were particularly unique in the world of sci-fi, but because of the timing of the show.  1960s Star Trek saw the wonders that technology could bring, reflecting a society that looked at the future through the eyes of the Jetsons; that is, they marveled at and were hopeful for a future in which mankind harnessed technology to create a utopian world where robot maids tidied up and dogs walked on suspended treadmills.  1980s Star Trek, though, reflected a society that was wary of technology and its ability to take control of our lives: they say just how ingrained technology had become in the everyday and bristled at our interconnectedness.  Thus, the Borg were born, threatening to use technology to turn each and every one of us into a mindless drone, a slave to the machine.

And in this episode of Franks and Beans, I get killed by a garage door opener!  So you see the natural progression to which I’m alluding, from the halcyon days of the 1960s to the anxious period of the 1980s to the utterly distopian early 2000s, the war is finally, terribly among us.  Plus, isn’t Skynet supposed to have gone online by now?  I never watched the Sarah Conner Chronicles when it was on.  Actually, that’s not true – I watched the first two episodes of it and it was terrible.  Summer Glau, why?!

I’d like to think that this episode of Franks and Beans is a very complete one, and even though it’s probably not too difficult to figure out what the punchline is going to be from early on in the episode, it still comes across as funny in that hey-Jeff’s-getting-hurt-and-falling-down kind of way.

One thing that I’ve mentioned a few times on this blog (that everyone reads) is that Larry has a way of working references to his favorite items, either fleeting obsessions or long-term passions, into the show, as evidenced by the many appearances to his Jeep (another one in this episode) and his insistence on mentioning his Blackberry in “Replacement Larry”.  Leading up to this episode, Larry took a tumble and scraped up, of all things, an index finger, and thus we can see the band-aid in full profile when Larry flicks the light switch in several scenes.  I have no evidence to prove that Larry intentionally brought the spotlight to his injured appendage, but it just seems too convenient to be a coincidence, you know?  Maybe I’m being paranoid, but there it is.

The biggest challenge we faced with this episode was, of course, the garage-door-to-the-head stunt that we had to pull at several different points.  This was difficult to coordinate, because as you might realize, I didn’t want to actually be hurt by being struck in the head. Larry stood off camera and held the top of the door and gently lowered it into my path as I walked toward the garage.  The first few tries were pretty unsuccessful not because of any technical aspect, but because Larry didn’t want to concuss or kill me when he brought the garage door down on my head.  It took some convincing, but we were finally able to get a realistic strike, I think, and the joke really only works when that’s the case.

And if one blow wasn’t enough, the reinforcement of the theme came by way of a second, third and fourth strike, which, as far as we can tell in this episode, kills me completely.  There you have it, folks!  This is how you know you’re watching Franks and Beans.  I die in it.  Hilarious!

Our “No!” ending is a strange one, but a good one, I think.  Larry, apparently, is desperate to get into the room, no matter what lies in his way, be it a miniature dresser or other tiny piece of furniture.  What I think is funny is that, as Larry struggles to squeeze into the opening, his voice also strains, letting us all know just how much effort he’s putting into this.    Guess what, folks?  Larry always gives it 100%.  I’d say 110% or something higher, but it’s literally impossible to give more than 100% and anything, and I refuse to do anything but completely adhere to the laws of physics on this show. 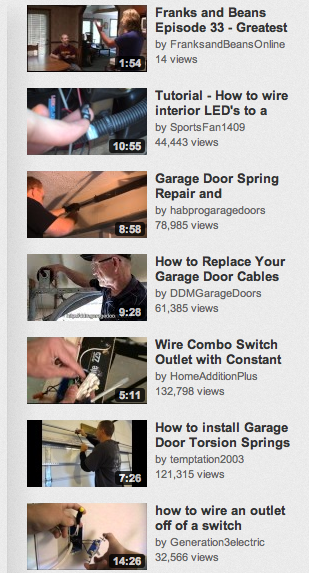 If you watch this episode on YouTube, you’ll see that the suggested viewings, as evidenced in the screen shot above, are both eerily accurate and hilariously misguided.  I wonder if any of the videos pictured lead back to Franks and Beans.  I really hope so.

You may notice that this blog doesn’t have the preface of “originally published on” at the top – that is because this blog is brand new for the first time in more than two years.  This also explains why there’s been such a lag between recent posts.  Because now I have to actually write these damn things from scratch rather than just go to the store of previously completed blogs from former iterations of this website.  Oh boy.  I’ll try to do a better job and make time for this blog because dammit you deserve it, Franks and Beans viewers!  And I might as well put off the things of actual importance in my life for one more day.