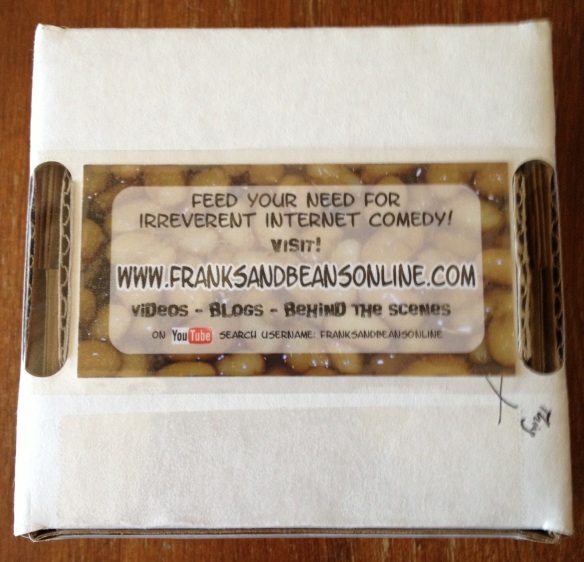 Let’s say you’ve bought some great items on the eBay from your pal, Jeff.  First of all, would it have killed you to drive up the bidding a little bit?  Those eBay fees can come down pretty hard.  Secondly, when you get your package, chances are you’ll see something like what’s directly above.

This, simply, is because I am not satisfied with sending an unsolicited advertisement for fantastic Internet programming to just one person!  Certainly not – I want the entire United States Postal Service to join in on the advertising push.  And, perhaps, anyone else who sees it along the way (or steals it en route), all the way until it reaches your waiting hands.  You flip the package over, see the baked beaned background, hold the image high in the air and exclaim, “Yes!  Yes!  I’ll go there RIGHT NOW!”

Or, perhaps, you might say something along the lines of “what the hell is this?!”  Either way, it’s seen.  And that’s all we can ask for.

Our Franks and Beans business cards have been out for a while, and already they are collectors’ items.  I say this because I’ve got like a thousand of them sitting in a box on a shelf, so I must be hoarding them for a reason.  I foist them on others mostly at comic book conventions, when I have a semi-captive audience and when people are looking for anything that might be free.

How much of an impact do these cards have?  A little, I guess.  After every convention, there’s a small spike in visitors to the site.  Whether that’s from the convention bump or a sign of our impending fame is difficult to tell.  I’m happy with them, though, and I guess that’s something.  The front of the card is the F&B logo and there’s some information on the back, including the aforementioned baked beans background that we got by dumping out a can of baked beans on a plate and then taking a picture of them.  And then eating the baked beans.

Below are the official Franks and Beans business card files.  They were expertly printed at www.uprinting.com.  Want to make your own?  Knock yourself out!  Hand them out to friends!  Wallpaper your bathroom with them!  Stick them to your Trapper Keeper!  And as always, watch the mail.

If ignorance is bliss, then how blissful do you feel after watching two men in their late 20s who apparently don’t know the alphabet offhand?  Or, perhaps you think of our homophonic 31st episode, “Why?”, differently – maybe we’re just practicing it like monsters would.  Wait, go back and read that last sentence again.  Fifty bucks says you thought I wrote “homophobic”.  Well, you should stop making such baseless accusations and stick to the task at hand.  Why would I write such a thing?  Insinuating that is getting pretty close to slander, my friend, so I’d watch myself if I were you – but I’m not, because I’m not a jerk.

Consistency is something I strive for in Franks and Beans, not just in each individual episode, but series-wide.  I doubt that I’m accomplishing all I set out to do, because things play out differently in the concept stage than they do when ideas become filmed reality, but I do think that I’m gaining some traction in this regard, and the last handful of episodes are a good example of this.  While episode 31 might not be very long, it gets its point across as well or better than pretty much any episode to date, in my opinion, as its quick, catchy punch line hits all the right marks.

As I see it, Franks and Beans has two typical jokes that it can tell – the episodic theme- and character-driven joke, and the quick, one-line, often physical joke that depends less on the people who present the joke than on the joke itself.

Let’s compare two of our previous episodes, “High School”, our ostensive pilot, and “The Slip”, episode 20 or whatever.  I don’t feel like looking up the exact episode number for that one – figure it out on your own, sheesh.  In either case, the jokes revolve around subverting expectations, but the manner in which we get to that point make the episodes fall into one of two categories.

In “High School”, regardless if you thought it was funny or not (you did, right?!), it’s easy to see that the joke – and in both cases there is usually one central joke, just different ways or presenting it – depends on the setting, the new characters and the buildup to what is ultimately a moment of moral defeat for one character.  In “The Slip”, the joke comes and goes in under a minute, and it all revolves around physical humor (not slipping on a banana peel…or getting punched in the face, depending on what version of the episode you watch).  If Larry and I weren’t such good actors and so integral to the show, it wouldn’t matter who played the characters in “The Slip”, because the joke is paramount.  “High School” plays things the other way around – the characters and the situation in this case are more than simply means to an end.  Each situation gets us to a joke, but in different manners.

This is the consistency I’m talking about, and the consistency I hope to achieve one day – if it is really an attainable goal.  I want Franks and Beans to have this balance, where we don’t have too many character-driven episodes in a row and we don’t have too many joke-driven episodes in a row.  I don’t know how we’re doing from a comprehensive perspective, but in the few episodes before and after #30, there’s a rare moment when everything seems to come together, like Halley’s comet or when you find an item that your REALLY want on eBay and the listing’s been misspelled (so…you know…you’re the only one who knows about it and can thus get it at a much cheaper price than you otherwise would…dammit, it’s not a perfect metaphor).

“Why?” obviously falls into the second category, as this episode is certainly driven by the overall joke of mistaking a letter for a word by recreating a popular melodramatic cinematic (…hydromatic) moment.  I’ve never seen anyone in real life fall to their knees and shout in agony to the heavens, but it’s been used so much in celluloid that it’s become a parody of itself in recent times.  Having Larry move on to “Zee!” brings the light of recognition to this joke, and it’s one of my overall favorites because even though we’re shouting it at the screen, and even though it’s quite obvious what we’re going for, this happens to be one of the more ambiguous jokes we’ve told – much different from the usual slap-in-the-face variety that we often revert to (funny in its own right, to be sure).  Having me go one step further and shout “Aaaaa!” heightens the overall mood – it would have been too quick to stop after just Larry’s bit.

I also enjoy the acting done in this episode more than in others – and I’m referring to the moments we’re not falling to our knees and screaming in agony.  I have the lingering suspicion that Franks and Beans would be twice as funny if Larry and I were better actors (for which I have no recourse other than to weep silently in bed at night), and this episode, where we actually do a halfway decent job at things, serves to do nothing but confirm those ideas.  Perhaps it’s just because we don’t have many lines, but the lines we do have…wow!  Look out.  I do think we’re getting better, if that’s any solace.

Our “No!” ending this episode might seem a little strange, and not just because Larry is standing on his head.  Seriously, do his legs look really skinny to anyone else?  Do you think standing on your head would alter the appearance – other than the obvious – so drastically?  Maybe I’ve just never taken the time to stare at Larry’s legs before.  I doubt I’ll start now, so I’m left with only one recourse – believing that Larry’s legs are wiry and brittle.

But no, that’s not what strikes me as weird with this episode’s requisite ending.  After we spend most of the proper episode shouting single words in an exclamatory fashion, we have this – a sequence where Larry shouts a monosyllabic word in an exclamatory fashion.  It seems fairly repetitive.  I suppose that’s okay, but it just sticks out to me every time I watch it.  I suppose that’s what happens when you have such disconnect between scenes in the episode, but that’s the theme we’re going for, and I’m happy with it, especially since it’s taken 31 episodes before it happened.

As you may have realized, the F&B blog as taken a bit of a hiatus.  But that doesn’t meant we’ve stopped caring about you, loyal Franks and Beans fans.  Oh no, we still think longingly about each and every one of you right before we go to bed each night.  It’s true!  Why would I make something like that up?

In any case, I’ll start posting content again soon and will try to keep these fallow periods to a minimum.  In the meantime, why not head over to the Teddy and the Yeti blog and read about our costumed adventures at Comic-Con?  Or check out the DukesCollector blog and read about…other things we did a Comic-Con?  The picture at the top of this post is a screen shot from the next new episode of Franks and Beans…so stay tuned!  And thanks for not hating me for ignoring this blog for the last few weeks.  Unless you do hate me.  That might be awkward.