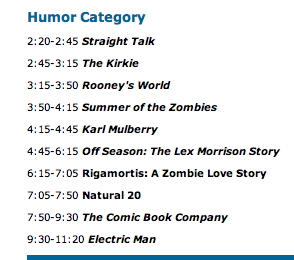 Heck.  Well, I guess the word is out and our much anticipated episode didn’t make the cut.  Looking at the list, it seems that the IFF went with longer films this year, as opposed to years prior, when there was more of a mix between long and shorter films.  I was hoping that the short length of our episode would help it squeeze in to a slot: if there were five or ten minutes out there to spare, hey!  Why not throw in Franks and Beans!  But it was not to be.

This is a shame, of course, but it’s not entirely unexpected.  The IFF has become increasingly competitive in recent years, which *actual* actors starring in some of the submitted films.  I suppose that’s the mark of a growing, successful film festival.  It’ll be interesting to see what some of the selected films are like.

Regardless of this disappointing news, Larry and I will still be at Comic-Con, flying the F&B flag.  I think we’ll be able to get a few more people to take a look at the website and check out some of the episodes.  Maybe someone will even (gasp!) leave a comment on this website!  It’s coming up soon…if you’re going to be at the show, come and say hello to your mustache buddies.  Best of luck to all of the 2012 Comic-Con IFF selections!