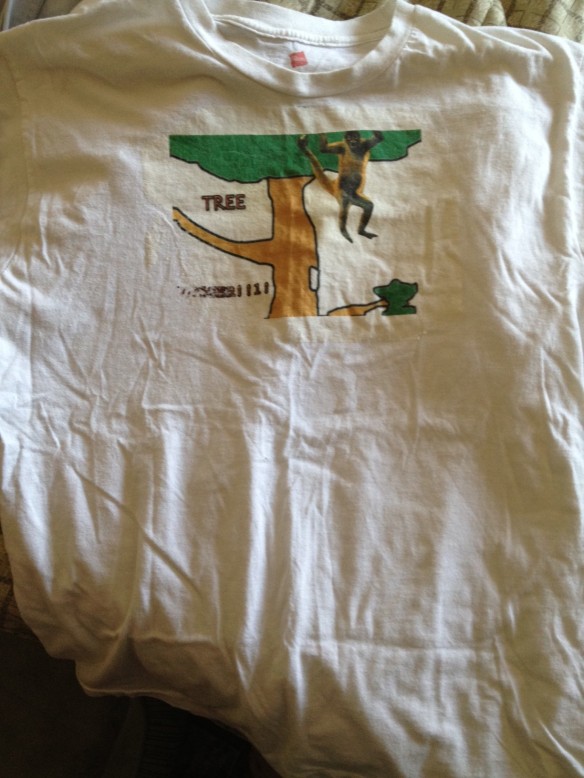 It’s been over three years since the episode “Tree Hugger” first aired, and every once in a while, Larry and I pull the shirt out of storage and it makes an appearance.  So how’s the old guy holding up?  I snapped a picture recently a the results are there to see.

All in all, it’s not doing too bad.  Considering that, to create it, Larry grabbed a decade-old sheet of iron-on transfer paper, ran it through a laser-jet printer and ironed it to a plain Hanes shirt, singeing the edges while doing it, I’d say that it’s lasted longer than expected. But there’s noticeable wear, especially on the corners.  The word “Hugger” is pretty much indecipherable at this point.  Honestly, the fact that it is becoming more and more ratty makes this frankly awful design even funnier, at least to me.

I’m in the process of making some shirts to sell at comic book conventions and the like, and the thought has crossed my mind to make some actual Tree Hugger shirts as well.  The chances of this actually happening, though, are pretty slim.  For one, no one would buy them unless, for some fantastic reason, Franks and Beans became an incredible hit (and in the event that happens…look out)…and furthermore, it would take away from some of the uniqueness and humor of this, the original Tree Hugger shirt.  But you never know.

Seriously, though, if I ever become famous (FOR ANY REASON), I’m totally donating this shirt to a museum.  Perhaps the Smithsonian.